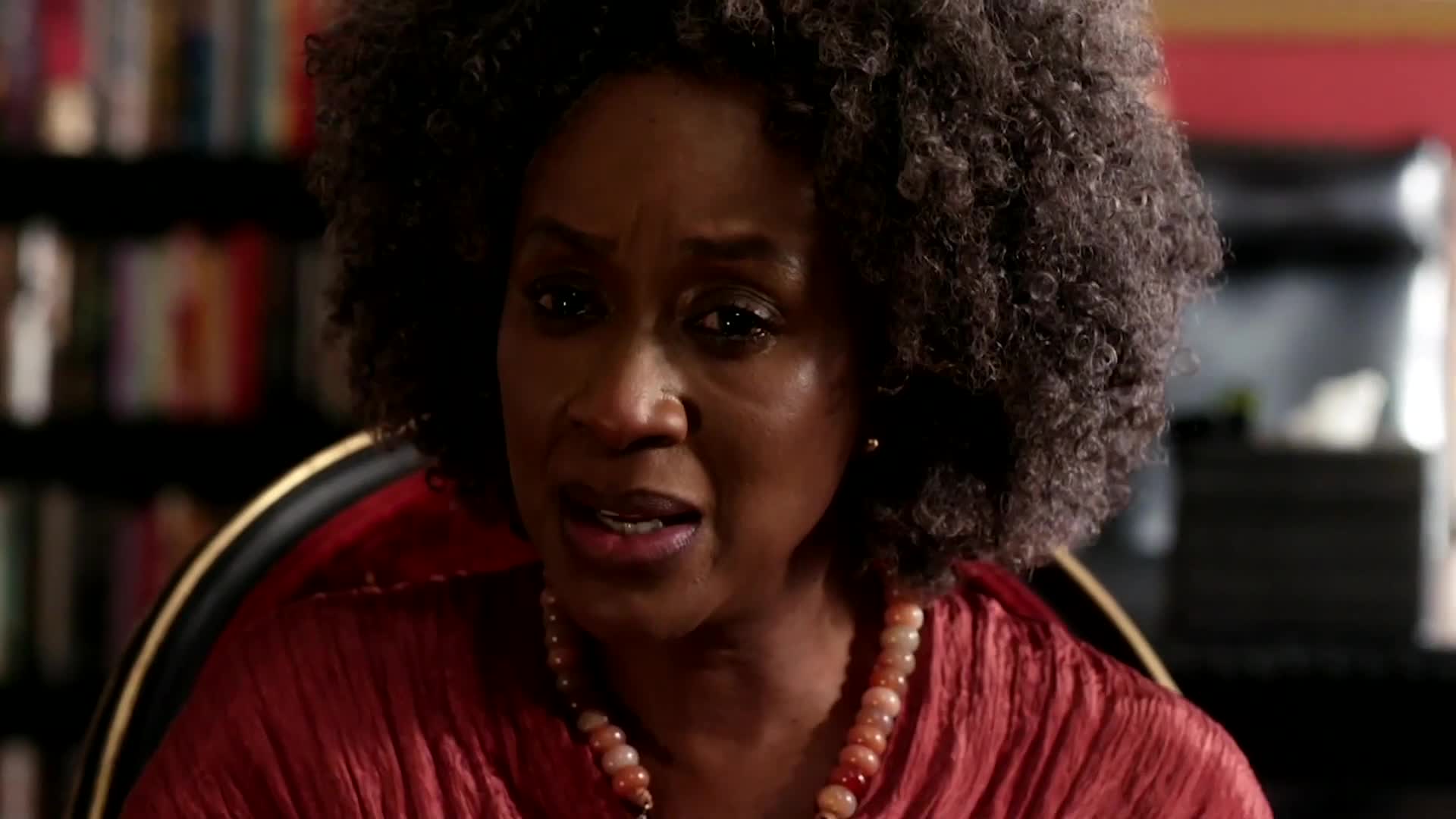 David doesn’t waste anytime taking control of the therapy session. He tells Dr. Halloway that they have a lot of ground to cover and they need to make this a brainstorming session. Then he pulls out flowcharts, pie charts, picto-graphs and powerpoint presentations with all of his problems. He has a list and he wants the doctor to help him solve the problems. Doc goes along with his plan. Lawd.

The rundown: my childhood friends are out to get me, my plan has hit some snags, I only have a small amount of time to deliver to Joe. Doc says it sounds super chaotic and asks how he feels. He says feelings have nothing to do with this. SMH. And he pulls out all of his graphs. I’m assuming that Dr. Halloway is used to David’s crazy. She nods and smiles.

David believes that fixing the work stuff will fix everything else. Seren and Marissa done messed him up. He shows her a picture of Seren and tells the dr that Seren is now a lobbyist that tried to kiss him after he risked his life for him a long time ago. And then, he shows her a picture of Marissa. The co-consiprator. He admits that he hasn’t treated her well in the past, but they still smashed in the laundry room the other day, so he thought they were cool. But he trusted both of them. They were friends. But they set him up and he’s ready to eff them up…without getting angry. Doc was like…you are angry. David was like…that’s what I need help with. The dr notes that he functions well under stress and it seems like that’s the way he wants it to be. It suits his needs. Chaos. It’s all round you . Maybe you create it. David doesn’t see how this is his fault. Doc was like…you don’t see your part? You’re kissing Seren and having sex with Marissa. David says that’s not the point. He was good to them both. He saved Seren and he was nice to Marissa when no one was trying to be nice to her. But wayment? I thought you said you didn’t treat her well in the past. You kissing somebody you ain’t seen in 15 years and you gettin it in with a woman who could make or break your development project – and that’s not high risk and chaotic behavior? And why does Seren have so much power over your life after not seeing him for 15 years? Maybe Marissa and Seren aren’t out to get you. David isn’t giving up. He needs answers. She gives him the card for a life coach. LOL. I’m with her. She says David wants his outside world to look different without changing anything on the inside and that’s not what she does. This coach will make you feel good and that’s clearly what you want. Nothing deep. David doesn’t even know how to react.

David reminds the doc that he paid of an hour. She tells him that she will refund his money. He tells her he needs her to do her job. She tells him she will – her way. Boo-yah! And then doc asks about Nicole. How are things? David says they are ok but why is she asking. Oh…just because you had sex with Marissa on the dryer. How does that fit? David said it didn’t mean anything. They have an open relationship and he told Nicole about it. Nicole was upset but she’s mainly upset about JG. But maybe hooking up with Marissa was because he’s scared of being close to Nicole. Look at David being insightful and ish. But then the real David showed up and he was just trying to get a cookie with the doc. She ain’t buying it. She gives him an assignment. Let’s sit here for 10 seconds in complete silence. Why was this so hard for David? When that clock started, his mind immediately went flying. He thought about no less than 85 things. David was far, far away when those 10 seconds was up and he’s sweating. The doc notices. How was that for you? Was it ok without your playbook? You know…that lil speech you gave me about putting up walls. You were performing. So we sat silently and you had to be present and feel all the things. So what did you feel? David explodes! He is tired of her telling him what he’s there for. She’s actually impressed and there’s a breakthrough. David doesn’t like it. He wants to stick to his work stuff. This doctor is hella good, because she keeps David talking and playing right along with him. He wants to talk about work stuff and she obliges. Tell me what you do. David is a law consultant for a real estate firm. He creates plans for projects. Something like the Ville redevelopment can take years to complete…like 6 years. So why did you promise 6 months? Why did you do that? David says its because this is his career and it’s his name. He can do what no one else can and he’s the best. He’s building a legacy. People come to him when they want ish done. Doc asks him what he sees himself doing in 10-20 years if he stays on this path? With all of these stressors. Why are you creating this swirl of chaos. Is this a pattern? An addictive behavior? Do you like this? David tells her he knows what an addict is and he knows what one looks like. Doc tells him that he’s so comfortable with it because it’s all he’s ever known. David is pissed and tells her she’s making stuff up. Oh really? When you have things in your life buttoned up and things are going smoothly, do you not push a few buttons to get things back up to chaos so you can feel normal? David is still mad at this addict label. He doesn’t drink, smoke or take any kind of drugs. But, per the doc, addiction takes many forms. Repetitive behaviors are one. And addiction can be inherited. And from what David has told her about Gloria, she has thrown herself into hardcore parenting with wayward kids – and that, too, is an addictive behavior. David missed Gloria being a good parent. He had to be the parent to both of them. But he couldn’t be the parent when JG got shot. He had already killed JG off in his head when he decided to be a police officer. He no longer had control and he had to create emotional distance to protect himself. JG’s been dead for a while now. He does the same with Gloria. What’s it like watching them live and being afraid to love them because they might leave. Who else have you already buried? And young David appears next to him on the sofa.

David is having all kinds of feelings and Little David is now there and in control. He wants to talk more. He’s ready. the doc still wants to know who else David buried? Your father figure? Ocean…River….no, his name was Sky. He taught me a lot. He wanted David to keep JG out of trouble, pay the rent on time, keep Gloria clean. But after he died, David kept seeing him. David stopped seeing Sky when he started going place where Sky had never been. The doc says he was outgrowing Sky, thus losing Sky twice. And there’s guilt. Maybe you never mourned him because you didn’t have time. You had to take care of everybody. So you had to erase him. That kid needs to be forgiven. Do you ever talk to that part of you? Whatever happened wasn’t your fault and he couldn’t have stopped what happened. And then Sky appears. And tells Dai that he’s done well for himself.

But now that Sky is back, Little David wants to know why Sky told him to run? He could have helped. He could have done something. Doc says it’s normal to be mad at someone for leaving you. Little David regrets listening to Sky. And Big David is tired of dealing with Little David’s voice in his head. He’s tired of the back and forth. Little David is out of control and he’s tired of fixing his messes. Little David says that he’s good with people and he fixes things. He’s Savior Dai and Big David is tired of him. The doc tells him that suffocating that other side of him is stressful and a job in itself. Our younger selves could be a welcomed thing sometimes? When’s the last time you had some fun? David was at the bottom of a pool in high school. But it wasn’t fun because he was wrong about Hurston and them kids left him at the bottom of the pool because he let his guard down. He didn’t stay ready. He didn’t listen to Sky. And he never let his guard down again after that. Doc asks him about his friends. Does he have any? He hasn’t had friends since college (which explains why he’s holding on so tight to Seren and Marissa, I guess). And that’s a long time to be alone. Maybe it’s time to tear down some walls and let people back in. Emotion isn’t going to destroy you. And then a smaller David appears. Yall! I bout lost it. David allowed baby David to come back. He allowed himself to see himself trying to wake Gloria up and crying because she didn’t respond. The doctor sees that he’s gone somewhere else and asks him to let it go and forgive. Little David forgives Baby David for being scared and needing help and not receiving it. And David is actually doing that. Someone needed to take care of that little boy and someone did. Now the kid who saved others needs you. Speak to him now. David does just that and apologizes to the smaller version of him. And just like that…the hour is up.

Doc was like…times up. David was like…what? You cannot leave me like this. What am I supposed to do. Doc suggests that he takes time off work this week for reflection. He has to do it to deal with these new feelings. What’s fun David like? We will keep working and you will get there. And then David is left to go live life after all of these revelations. I was low-key scared for what was about to happen next.

David leaves the building with Little David right by him. Little Dai is ready to take time off work and have a good gahtdamb time. Big David ain’t there yet. LOL.

Listen, yall! This was a heavy episode but I do believe that some folks got healed on OWN’s dime this evening. Oh…and the star of this episode was the therapist. I had been saying I don’t know how the hell she kept putting up with David and his foolery! I guess that’s why she’s the therapist and I’m just a recapper because ain’t know way I would have put up with David “Dai” Young for this long. But for real, she was the bomb and it made me want to find a therapist JUST like her. 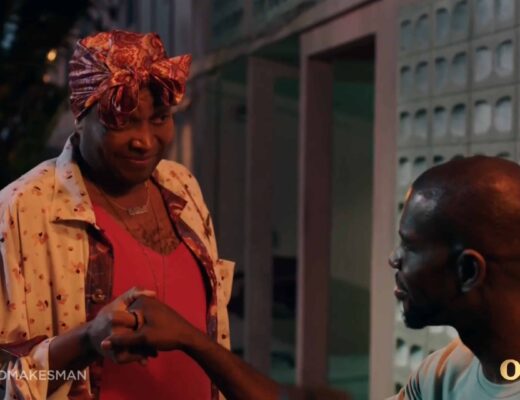 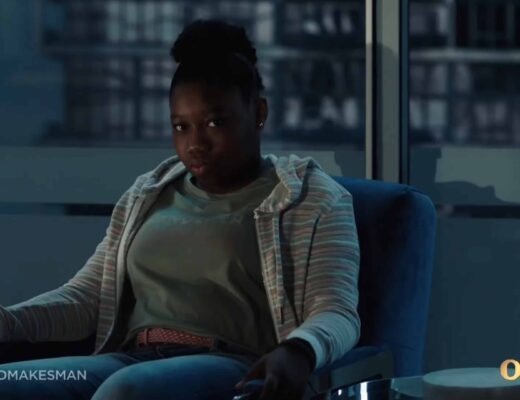