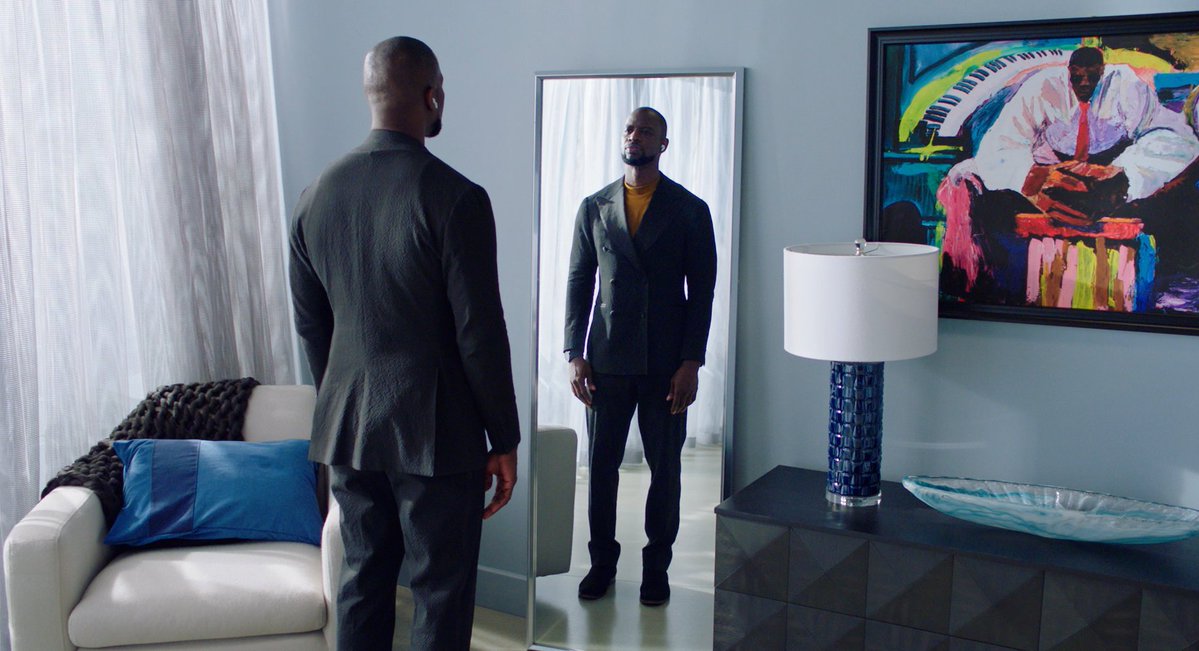 Well, it’s another sweaty sheet morning. 3:28AM to be exact. But now David is trying something new with some kind of calm app with positive affirmations (I am kind. I am present. I am a good person, etc). I don’t know if this is supposed to take the place of therapy or not, but I promise you it ain’t gonna solve all David’s problems. He seems jazzed about it tho.

His app told him he was gonna have a good day, so he’s tryna manifest that. He tips the ladies at the coffee shop. He makes plans to take Nicole out to her favorite restaurant. He’s smiling on the train. And then he visits his therapist (in his head) and tells her about herself and how he’s healed. Once again, David was dreaming about what he WOULD LIKE to say. Of course he doesn’t. He finds himself right outside of his therapist’s building, leaving a message for her about how he doesn’t feel well and wants to reschedule. Why is this dude fighting therapy so much? My Gawd. He’s exhausting.

There’s one thing that might mess up the good vibes David was getting from his Om App. And that’s a meeting with Mr. Padilla. There’s been negative press for Padilla’s company since Marissa opened that can of environmental worms all over David’s lil project. David says that everything in the newspaper article is inconsequential and Padilla accepts it. But then he asks David how his brother was doing and David forgot that he never told Padilla who his brother was before he answered the question. Gotcha! And Padilla ain’t happy about being lied to. David explains his way out of the situation by saying that they can use the shooting as part of their plan. So Padilla was like…you are willing to talk publicly about your brother? Of course. Of course. My brother got shot there and it’s the perfect way to explain the reasoning behind we want to make a change in the Ville. And it makes Padilla look like the CEO with the heart of gold. Padilla is on board and suggests a charity fundraiser for the community and all of the people whose support they need. Oh…and have JG come and speak at the event about how this project would give the community a second chance. Lawd. So basically, David done sold JG out. He’s so disgusted by his own actions that he throws up in the trash can at the restaurant. Smh.

Now since David done volunteered JG for this lil event, he had to catch a Uber straight to JG’s crib. He walks up and overhears JG and Trish arguing. Apparently, JG is thinking about leaving the force. Trish is worried about his pension. David is listening at the door and didn’t even notice that Tren was sitting off to the side. Guess she was tired of being in the house with her parents. David gotta sell this thing to JG. He tells Trish and JG that folks at his job heard about the shooting and want to honor JG. He tells JG about what they want him to do (say thanks and talk about violence in the community). JG is over David, especially after he had to try to defend him to everybody in the Ville…and especially to Shella. David sees that as an opening and tells JG that Shella is going to be there. David is playing with fiyah right now, ain’t he? That totally changed JG’s outlook on this shindig. David tells JG that even Elijah might be there. But JG declines the invitation. David asks JG to just think on it. Meanwhile…back at David’s job, Elan done already got the program ready to go to print – with JG listed as the guest speaker.

So after a full day of bs, David takes Nicole out on a date. He has something important to talk to her about. He confesses about Marissa. Nicole is like…huh? And she assumes he wants to break up. Nah. He doesn’t want to break up. In fact, he wants to be exclusive now. Huh? David says he’s just tryna do the right thing, which brings Nicole to another pressing issue. He didn’t tell her about JG getting shot. That’s some pretty heavy info, but she had to find out about it on the news. You can’t be serious about a relationship when you don’t even share information? He tries to talk his way out of it, but it doesn’t work. Plus Elan keeps calling. Nicole ain’t here for none of David’s foolishness and exits stage left. Yes, Nicole. Save yourself, girl.

Now David has to go to the Ville to get them to come to his event. First up, Shella. He tries to be all smooth, but Shella can’t forget that the last time she saw him was in the laundry room gettin it in with Marissa. She ain’t over that yet. But while David was trying to smooth talk Shella, Elijah tells David that he/she has spoken to Gloria and is really for the Gala, honey! Elijah was like…come on up to my apartment so I can show you what I’m finna wear. David was like…ummm…this is a low key event. In other words, don’t come as you are. LOL. Elijah got the point. And so did Shella. Shella is over David. But David keeps trying to persuade her to come and see what he has in store for the Ville. Shella is ready to slam the door in his face, so he had to try one last thing — JG is speaking and he wanted me to invite you. Lawd. Per the usual, the sound of JG’s name done changed Shella’s whole mood and attitude about this lil situation.

At the train station, David sees a familiar face. It’s TARE!! Remember her? The neighbor and his date to the school dance? In David’s daydreaming mind, there’s a whole dance number with young Tare. When he snaps out of it, Tare was like..there you go again…living in your head. Yeah. I’m kinda tired of his lil daydreams, too. Tare seems happy to see him. It’s been a year. Tare invites him to come with her to rehearsal for her showcase. David has to work, but invites her to the gala. She can’t come. Tare heard about the plan for the Ville from her mom. Of course David can’t effectively communicate. The convo on the train ride ends with Tare getting off at her stop, with no plans to reconnect for real.

Because David doesn’t drive, his next stop is a bus station, where he runs into Tren who is trying to run away. At this point, I’m scared because David is the wrong person to try to talk Tren of the ledge. Anyway, she ran away because she’s tired of her mama and JG fighting. She actually calls him JG…which is interesting. David asked why she didn’t go to Gloria’s. I find it interesting that he didn’t call her “mom” or “your grandma.” Tren said she did that but Gloria was getting on her nerves with her hot flashes (there the hot flashes go again…yall think something more is going on with Gloria?) and Gloria being yelling at her in front of this lil boy she likes. Tren has heard about David’s friend who ran away. It’s the reason why Gloria opened the house, but she never told Tren the whole story. Because no one tells her the whole story. David hesitates because he doesn’t know how to tell her about Seren. He was his best friend and his home situation was bad and he needed to get out. He helped him get out. And he misses him. But now they gotta walk back to Gloria’s house. And when they get there, Gloria is sitting outside on the steps. Both of them know it’s about to be some problems. Gloria goes in on Tren about her little stunt and takes her phone. She trusted Tren and Tren broke the trust. And then Gloria has a breakdown that even has David showing emotion and concern. Gloria thanks David for brining Tren home. David actually shed a tear over this situation, yall.

The next day, David continues being David. He goes to Nicole’s yoga studio and tries to say all the right things. It doesn’t work because what she asked for was space and he didn’t hear a word she said. And then he goes to JG to try to convince him to speak at the event and JG tells him the same thing. You are not hearing me!! I don’t want to do it. I got a lot going on. I ain’t got the energy to do extra stuff right now. And then he tells JG that Shella gonna be there. Then David goes to pleading and JG is trying to figure out why he wants this to happen so bad. Something’s up.

Am I the only one that’s tired of David? He’s so manipulating and it’s exhausting. I am waiting for him to turn a corner, but I am getting tired of waiting. Next week we are supposed to see Seren. Looks like he’s alive!!! So where has he been? It seems like everybody thinks he’s dead. What did yall think about this episode? And what will the Seren/David reunion be like? I can’t wait. 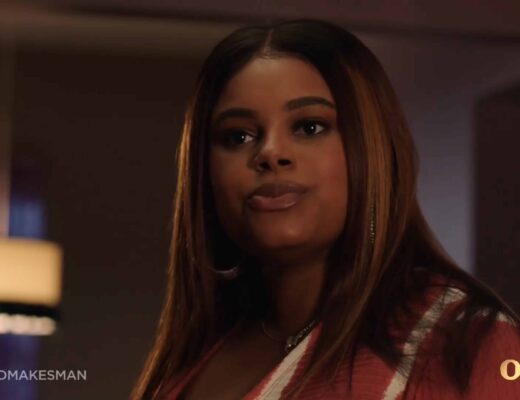 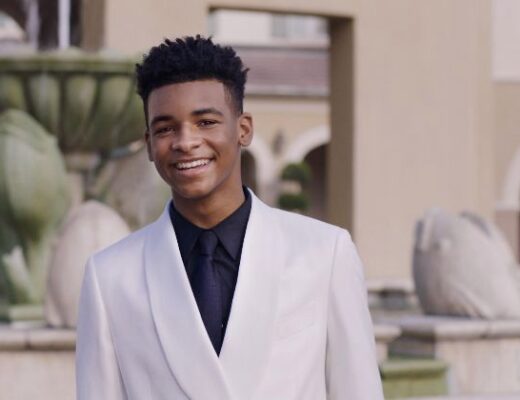