It looks like Mae’s little sermon at the party may have put some doubt in the hearts and minds of the deacons.  Clara (and Connie) are meeting with Grace and Judy about H&H’s plans. Clara is concerned that the history of the church will be lost in this foolery.  Grace is advocating for H&H’s plan. This is all a part of her plan to look like she’s all in…especially since Judy is sitting right there.  Of course Connie is there to advocate for H&H, too. Clara agrees to vote “yes” at the meeting and they promise her that all will be well.  Just like clockwork, Mae calls to get the update on the meeting.  Bishop is headed over to talk to Connie to make a final appeal. And then Phil come thru. Le sigh. Grace asks how she can help? He tells her that she can resign. Say what now?  Phil tells her that he has proof that she lied to the police, but if she steps down, he won’t share it with the police.  She has until Sunday to decide.

Jacob is getting ready to go meet up with Dante when Kerissa comes to ask about his parents’ will.  Jacob still doesn’t want to ask them. It’s rude to do so.  If she’s so unhappy, then she can go ask Mae about who they are leaving the house to.  Kerissa is so pressed and so strapped for cash, that she went right to Mae and asked.  Kerissa tells Mae that they need more cash for this housing market because it’s “crazy” out there. Mae tells her that it’s “crazy” in here, too.  Just the other night she had to clear out the safe so it wasn’t jacked by her son’s wife. LOL. Mae basically calls Kerissa greedy and desperate before she gives her the answer. The house will be left to Jacob, Grace and Charity – equally.  Now that Kerissa has this info, she goes straight to Grace to ask for money. Grace happens to have cash on hand (from Lionel’s estate), but she says that something about this whole thing seems rushed and weird. Kerissa agrees, but since things have changed so drastically, she needs to get out.  Grace asks how much she wants.  Per Kerissa, their stake in the house is worth $1Million, but she will take $500K…or anything over $250K.

Bishop catches Connie just as she pulls up to her house.  She tells him that they need to let it go.  Grace is on board and she will lead the church forward.  I guess Bishop had enough, because he took a left.  He wasn’t supposed to let Connie know that they know that she’s being bribed by H&H. Bishop had all the receipts, too. And he laid them out one by one for Connie.  Connie pretends to be unmoved.  Later that night, Bishop let Mae know that he spilled the tea about the bribe because he had to. He thinks it worked.  Mae is livid.  This could hurt them more in the long run.  She believes that this will be their undoing.

Of course Grace knows that Phil could have only gotten the information he has from ONE person – Charity. Charity claims it didn’t come from her. Grace demands that Charity tell her what information Phil has. AJ’s life hangs in the balance. Charity stands firm.  Grace turns to leave, but before doing so, tells Charity that whatever she thinks she is going to get out of this, it’s not worth ruining a person’s life. Charity tells Grace that she shouldn’t have lied and denies doing anything.  Charity looks like she is regretting this, but it’s a little too late for that. She gets on my dayum nerBs.

In Phil’s office, Judy is trying to find out how things are going with Charity. Phil says it’s going well. Judy is surprised. How could Phil be in love with Charity? She’s nothing like Judy. Phil says that they actually have a lot in common and Judy concludes that Phil is with Charity because she’s Black.  They go back and forth.  Judy pulls out the only card she has – her daddy.  If Phil wants Judy to help him pave the way for Charity’s place at H&H, he should do as she says. She wants to go to dinner…to get to know Charity a little better. SMH.  I smell a disaster brewing.  But before Judy leaves, she has one question for Phil.  What makes him think that Grace isn’t her daddy’s pick (and not him)? He says that he has a “feeling.”

Bishop’s talk did get to Connie.  She wasted no time letting Phil know that the Greenleafs know about the bribe. They will have to amend the motion to expand the Deacon Board.  Judy wants to know how that could happen. Both Judy and Connie blame Karine. The current members of the board will have to maintain control…or the Bishop will go public with the bribe info.  Bishop is blackmailing you? What will make him happy? Connie says the new split has to be 60/40.  Judy is pissed and goes straight to Karine to fire her. And then she barges in on Grace to ask whose side she’s on. Grace doesn’t know what the hell she’s talking about.  And Judy doesn’t tell her.

Now that Kerissa got what she wanted – an answer on the will and some money from Gigi, she’s big happy and got all the candles lit when Jacob comes home.  Now that Kerissa is in a good place, she doesn’t want any more calls from Fernando.  But, Fernando is calling to give her news about the Greenleaf Mansion.  She’s all ears now.

Previously, Jacob asked Dante to partner with Excellence.  He declined before, but since he got benched and needs to find a way back on the field, he has changed his position.  He wrote Jacob a check for Excellence and Kerissa. It’s her lucky day.  He is also opening a sports bar and didn’t invite his ex, Nikki (who is now living with Zora and Sophia) to come.  Zora tells her to go anyway.  Sophia keeps interjecting with shady comments (because Dante and Sophia are a thang now) and Zora tries to keep the peace.  They both decide that they should show up to the grand opening late…and cause some trouble.  They do just that and when they get to the bar, guess who is there??? Sophia. You know Nikki was BIG MAD and starts a fight with Sophia.  Nikki and Zora get escorted out by security and Dante hugs up on his new girl – Sophia.

At dinner, Judy tries to act all innocent while she drops breadcrumbs of information about her past with Phil.  Charity basically threatens both of them to tell her what’s going on.  Uh oh.  After dinner, Charity isn’t in the best of moods.  Phil has some splainin to do.  He says it was a long time ago and they stayed friends for obvious reasons.  Charity tells Phil that she threw her whole life away for him and now this?  Phil turns it around quick and gives Charity a key to his apartment. He’s an open book. She can come and look around. He has no *more* secrets. This dinner was just to get Judy on their side. He wants her to run the church with him. They in this thang together. And Phil tells Charity that he loves her. *insert side eye here*  Judy checks in the morning after she tried to wreck the dinner to make sure that all was well with Charity.  It turns out that they may need her in the future. Per the bylaws, the most senior Greenleaf employed at the church can cast a tie-breaking vote.  And, per Judy’s math, they will need Charity for an upcoming vote. A vote that Phil has no idea about and that Judy is refusing to share info on.

Grace comes to Bishop and Mae with the bad news about Phil’s blackmail.  She has to resign or stay and he rats her out.  Grace is adamant that it’s Charity’s fault.  Grace and Mae almost dismiss Charity’s part in this because they see Charity has a helpless pawn in this whole scheme.  Mae still believes that AJ IS guilty, but Grace tells her that she believes AJ is innocent.  And because she believes that, she should stay and fight.  Mae then turns on Bishop. This is your fault.  You just did the same thing to Connie, and now Grace is being blackmailed, too.  And this is the first time that GiGi is hearing of it.  Mae gives her final word. Do not back down.  Get up on Sunday and tell the whole story. All of it.  Bishop disagrees.  And Mae doesn’t care about keeping AJ out of jail. If he did it, let him go to jail.  This is about GiGi. Speak your truth and you win.  Bishop tells her to do what’s best for her son.  Mae tells her to do what’s best for her soul.

And now it’s Sunday. Grace gets up to preach, then the door of church opens and AJ walks on thru.  Grace is shook.  She can’t go on.  She resigns.  Judy asks Phil why she’s doing this. Charity is pleased.  Mae and Bishop are disappointed.  And the congregation is in shock.  #Jesustakethewheel

What news did Fernando have about the Greenleaf Mansion?  I bet he (and H&H) have found a way to steal it from Mae and Bishop…with some help from Kerissa.

Will Sophia and Dante have a real relationship? And how will all of that play out? How can Nikki, Zora and Sophia live in the same house with all of that going on? And, Zora has chosen her side and she is riding with Nikki all the way. What’s Jacob going to say? What will Grace have to say about Sophia’s new relationship with Dante of all people?

And Charity.  I am so over Charity.  She got what she wanted for now. But, I really don’t think any of this will play out like she thinks it will.  Phil isn’t first in line to lead Calvary and Phil rarely knows what’s going on. Bob and Judy hold all the cards and Judy is mad that Phil found another woman.  I promise she will make it her business to make sure that Phil and Charity don’t stay at H&H.

AJ is back and Grace has chosen her son over the church.  She has really given up a lot for him.  She lied for him, she gave up being a pastor and she also gave up any chance of ever getting the church back…all for AJ.  He better come correct this time.  I am bout tired of him, too. And SN: where the hayle is Noah.  He better come see about his son.

When will the people find out about Connie taking the bribe? I don’t know how that information will fit into the puzzle of what’s going on here, but I am so sicka Connie that I just need the Deacon Board and the church to find out so they can roast her. Maybe Karine will do the heavy lifting on that one. I am sure she is still hot as fish grease over getting fired by Judy. 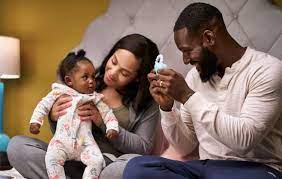 David Makes Man – When It All Falls