Dominic called Nova and told her that his trip was extended again. But then he showed up at the door and surprised Nova. I’m actually surprised that Camille wasn’t posted up at the house when Dom came by. Anywhoooo…they ain’t wasted no time getting down to business. Dominic made it known that he is all about Nova. They have quite the reunion – but is Nova all in? Later, Nova did something that’s rare for her. She told Dom about something she’s working on. She’s writing about her first loves and all of her mistakes in love. That’s gonna be quite a novel. Because whew…chille. Dominic was real curious about it too and opened Nova’s computer when she left to take a call from Charley. *cue the music*

Charley couldn’t leave the campaign trail to come to Prosper’s wedding (insert side eye here), but she sent Prosper a watch to wear on his big day.

Sandy and Prosper tied the knot in a beautiful farm wedding. It’s so good to see Prosper have a happy ending. RA gave a wonderful best man speech.

Apparently Billie went back to Chicago and had a good time with Vince. Now Vince is back in St. Jo and they making out like school kids. Later, Billie asks Vince to marry her and they get caught half naked in Prosper’s house when Sandy and Prosper come home. LOL. I don’t really care. I just report the news.

Nova pulled RA to the side to talk about the movie and to make sure that he was still good with it. He is. And then she gives RA the advance check and tells him to use it however he needs. Let’s be real. Nova owes him that and much more.

Vi finally put her money where her mouth is and went to find Betty, with the help of Wood. Bout dayum time.

Micah showed Keke the pics from the wedding. Micah took that time to ask why Keke broke up with him. Keke confessed that people were judging her for being with him. They couldn’t believe that he would want to be with her. Micah validates her and tells her that she’s beautiful. Keke tells him that she felt like she needed to get out of his shadow. She felt like she would always just be Micah West’s girlfriend and she apologized for breaking up with him.

RA is still thinking about how Landry ain’t paid his loan bills in forever. And how he lost his farm because he couldn’t pay his. I beg to differ. RA chose what he chose. He had the family who had the resources to help him pay whatever needed to be paid. He chose to be stubborn. And chose crime.

RA, Darla, Billie and Vince strategize on what to do next about Landry. They decide to send Darla to talk to Landry. She goes to Landry and asks about the burning cane on his land. He says he doesn’t know what she’s talking about. She also mentions the decrease in his assets. Of course Sam is acting like nothing happened. And then he gets up in Darla’s face and tells her that she need to stop talking to him like she knows him. But Sam was like…you know what? I don’t even care. I’m signing the deal with the outlet mall tomorrow. Darla told him that was cool because his world finna come crashing down anyway.

RA and Darla then went to the USDA office and paid their loan off in full. They also went in on Mr. Miller who called the black farmers thugs looking for a handout. And he’s not going to take their check because he can’t verify their income. And then he agrees to cash their check if they give him some money on the side. But guess what? They recorded everything that dude said. They got evidence. Good. But I know this is far from over.

Everybody was having a good time when Parthena notices a smell. They look outside and the cane field is on fire. *insert deep sigh here* The fire was controlled, but is seems to have been started on Landry’s side of the land. They start to get all caught up in Landry foolishness, but Vi tells them to cut it out. We are here to celebrate and that’s what we gon’ do.

When Nova left to talk to Charley, Dom found exactly what he was looking for. He read all about Nova and her scandalousness and all of her men…and women. Most importantly, he read about her encounter with Calvin while he was in the bush. He was out there doing the Lord’s work and worrying about her in the storm, while she was with Calvin and calling him the love of her life. Bless it. Nova was like…that’s a violation of trust. That’s rich coming from Nova. Anyway. She tells Dominic that she needed to get through all of that to make space for him. Dom ain’t buying it. His love didn’t come with all these variables. He loves her. She has been struggling to love him. Nova tries to convince him that she’s all in. Will Dom buy it?

Darla volunteered herself to speak with Landry directly. I know Darla is really trying to assert herself, but I think either Bllie should have gone or they should have gone together. I’m not sure what the encounter accomplished.

I really want Nova to be honest with Dominic. He mentioned before that he could see that she has a different kind of connection with women and one that he may never see or feel for himself. He’s so into her. She’s so into…whatever is happening with her at the moment. I don’t want him to get hurt.

Sandy and Prosper cut the top layer of the cake. Where they do that at?

Wonder how much that advance check was for. Is it enough for them to get out of this cycle of oppression for good? Please make it so, Jesus.

Vince was talking about them going through depositions in law school. I prolly read a few depos in law school. That was a poor choice on the writers’ part. Con Law? Yes. Depos? No. 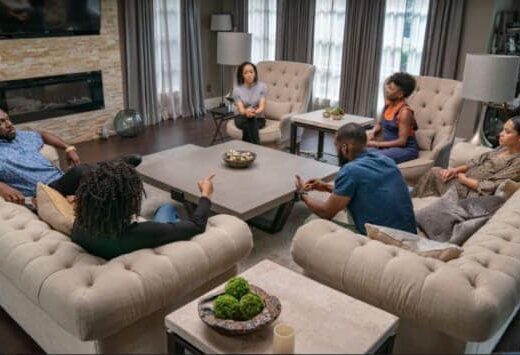 Queen Sugar – “They Would Bloom and Welcome You”